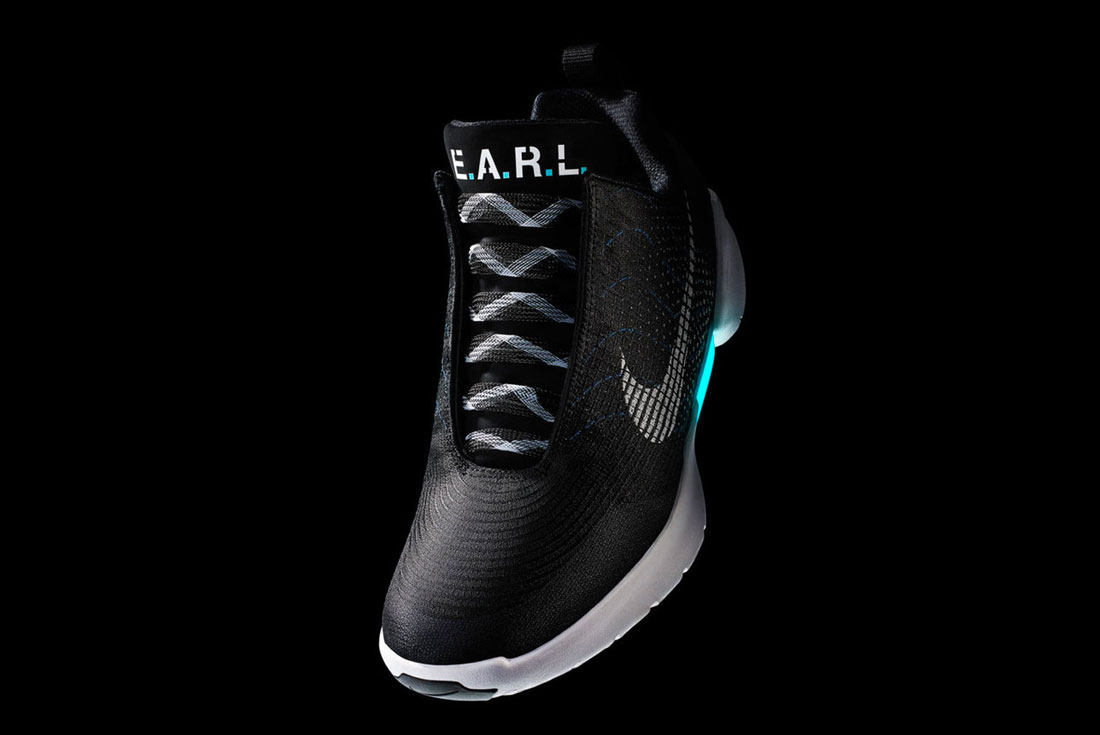 Hired straight out of college as a footwear designer and product tester in 1979, Mark Parker's career at Nike spans an incredible 40 years. From his work with Hiroshi Fujiwara and Tinker Hatfield at HTM to his projects at Nike's Innovation Kitchen, Parker has played a role in some of the most iconic sneakers in history. An innovator in the purest sense of the word, Parker oversaw the production of Alpha Project's Air Presto, Nike's first ever visible air unit, the cult-favourite Zvezdochka, and numerous other icons in Nike's cannon. But it's the Nike HyperAdapt 1.0 that's undoubtedly Mark Parker's masterpiece. Nearly three decades in the making, the HyperAdapt is Parker's supernova, radically altering the ways we perceive design. A blueprint for the future, the HyperAdapt will continue to revolutionise the footwear industry long after Mark Parker steps down on January 13, 2020. 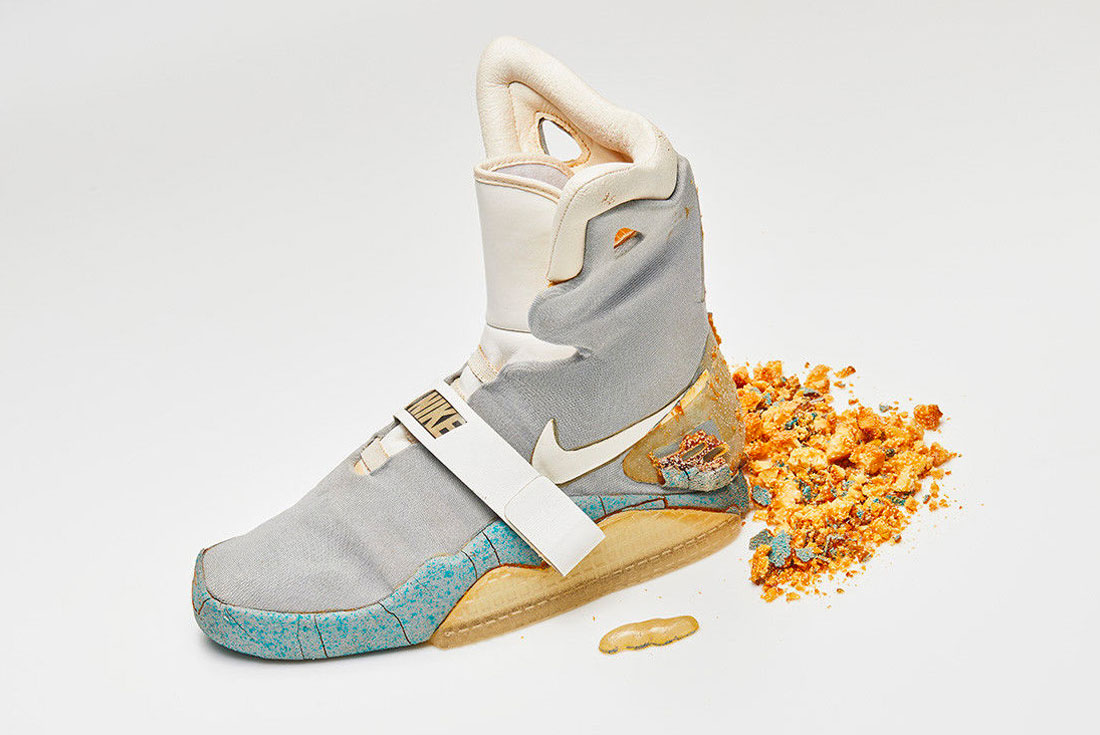 ‘What about a shoe that would essentially come alive when you put it on?’ Parker contemplated back in 1988. ‘Wouldn’t it be great if shoes could do that?’ Mark Parker and Tinker Hatfield were deep in a brainstorming session, generating ideas for a sneaker to feature in Robert Zemeckis’ Back to the Future Part II. The result? The mythological Nike MAG, the so-called ‘flying car of footwear’. When Marty McFly wore the ‘power-lacing’ shoes in the 1989 classic (one of the highest grossing films of the year), the Nike MAG quickly assumed cult status.

Sneakerheads, futurists, and film boffins all signed online petitions and penned letters to Nike, pleading for a release. Nike released two MAG replicas in 2011 and 2016, but they were extremely limited in quantity, with 15,000 and 89 pairs produced respectively (the last 2016 Air Mag sold online for $38,000). But it wasn't until nearly 28 years of brainstorming, bundles of prototypes, and perpetual false starts that the HyperAdapt 1.0 was finally born, a sneaker encapsulating all the prescient tech and aesthetic grace that defines Mark Parker's time at Nike.

‘Innovation at Nike is not about dreaming of tomorrow,’ says Hatfield. ‘It's about accelerating toward it.’ Powered by E.A.R.L – Electric Adaptable Reaction Lacing – the HyperAdapt 1.0 features LED lighting, heel sensors, motors and cable systems that adjust to an ‘algorithmic pressure equation’. In English? The sneaker actually moulds to your exact specifications. When you slip into the HyperAdapt, the sneaker writhes to sense friction points. You can then use buttons on the side to tweak the fit, allowing for micro-adjustments on the fly.

Composed with Flywire and Flyweave, the HyperAdapt 1.0 rewires the connection between electrical, digital and mechanical engineering, subverting the very idea of traditional lacing systems. A collaborative effort between dream team Mark Parker, Tinker Hatfield, and lead-engineer Tiffany Beers, the HyperAdapt packs in three decades of blue-sky ideas and technologies, and looks like it's been torn straight from your midnight reveries of space travel. 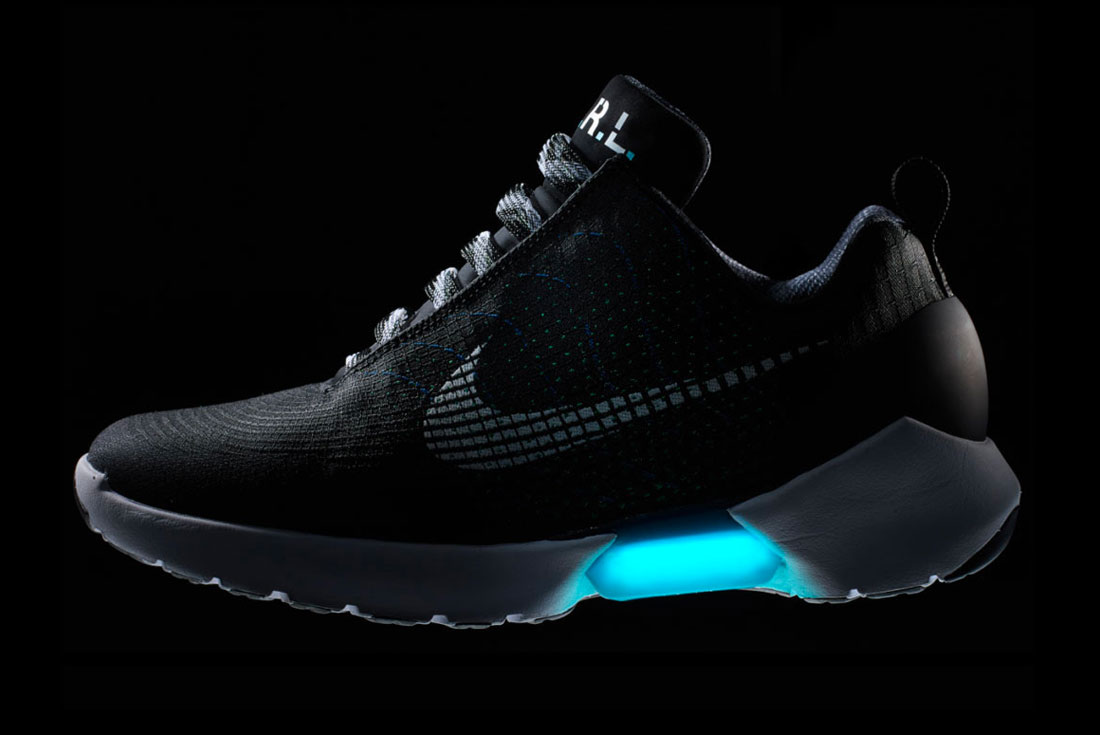 ‘In the Future, the Product will Come Alive’

The HyperAdapt 1.0 is just the first step in the revolution of adaptive footwear. More than just a sneaker, it imagines a new world of footwear solutions. Tiffany Beers described the sneaker as a ‘platform’, terminology normally reserved for Silicon Valley. Like any new technology, it will continue to exist in a nebulous stage until further defined. Who knows how the ‘platform’ will grow, ‘update’ and collide with other technologies. Right now, it's the closest thing we have to a living, breathing organism on your feet – just like Parker hypothesised all the way back in 1988.

This year, Boston Celtics guard Jayson Tatum debuted the Nike Adapt BB, a laceless basketball shoe manipulated via a phone app. It was the first time in NBA history that a player took to the court in auto-lacing basketball shoes. The potential is immense. Imagine having a sneaker that can react to your movements in real time? Beyond athletics, think of the benefits for those with severe arthritis or similar medical conditions.

One could be forgiven for believing that the HyperAdapt 1.0, Nike's first real foray into adaptive lacing, would resemble something like the crude animatronics of 1980s science fiction. But it doesn't. The HyperAdapt 1.0 is as aesthetically satisfying as it is game-changing, and is undoubtedly Mark Parker's magnum opus in an overwhelming body of work. Yes, Marty McFly would be proud. Where we're going, we don't need laces (or a DeLorean to get there).